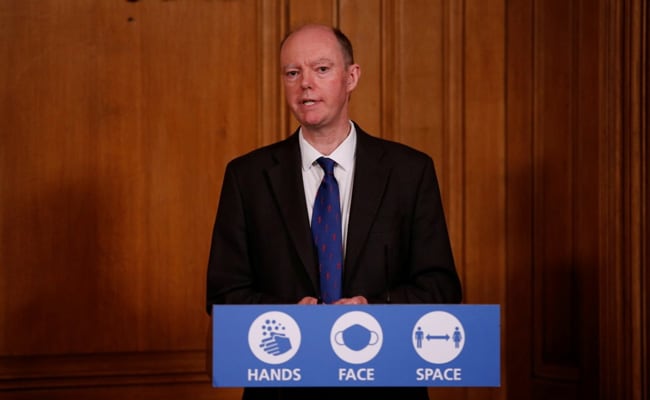 The fast-unlocking process across the country would lead to a substantial surge in covid infections, Said the countries chief medical adviser Prof Chris Whitty. Prof. Whitty said that MPs would be dangerous and risk lives among the many vulnerable people not yet protected by the vaccine. He also opinioned that “A lot of people may think this is all over. It is very easy to forget how quickly things can turn bad. His comments come in the middle of pressure from backbench Tories to ease lockdown more quickly given the drop in infections. The country’s covid recovery group which includes over 70MPs has pressured the prime minister to relax more steps very quickly.

Prof Whitty said by appearing before the Science and Technology Select Committee, “Under all the scenarios, if we unlock very suddenly, all the modeling suggests we would get a substantial surge while a lot of people are not protected.” Meanwhile, the latest daily figures for Covid show 5,766 more cases have been identified, 590 new admissions made to the hospital, and 231 deaths recorded within 28 days of a positive test. Also, figures published on Tuesday states that over the weekend the number of people in hospital with Covid-19 fell below 10,000 for the first time since 25 October. The latest figures, covering 7 March, show there currently are 9,418 people in hospital with coronavirus.

In his evidence to MPs, Prof Whitty set out why, despite the impressive vaccination rollout program, there are still many people vulnerable to the virus. It takes about three weeks to build up immunity following the first dose of the vaccine. So only the first four priority groups – the over-70s, health and care staff, and the extremely clinical vulnerable will have developed significant protection now. Prof Whitty opinioned that most Covid deaths have been in these groups. But nearly half of hospital admissions have been seen in the under the 70s. And most transmissions were driven by younger people, who had more social contacts.

Prof Whitty opinioned that it was unrealistic to expect zero deaths. Even with a gradual lifting of restrictions, modeling suggests, there could be another 30,000 deaths before the summer of 2022. And this was because while the vaccines were good. Prof Whitty also said they were not 100% effective and with some people refusing to have them a proportion of the population would remain unprotected. It was impossible to predict exactly how many would die, Prof Whitty added.

He also commented that it would be a “significant number”, though nothing like we had seen over the past year. “The ratio of cases to deaths will go right down as a result of vaccination – but not right down to zero, unfortunately,” he said. But he pointed out this was already the flu case, saying in a bad winter 20,000 people could die. And while Covid was expected to become seasonal, with future surges in the autumn and winter, he could not rule out a rise in cases in the summer.

The UK govt has just stepped into the 1st stage of unlock procedure on March 8 by opening all schools and allowing outdoor after schools and another key part of unlocking one includes two can sit together outdoor. Also, care home residents are allowed with one visitor. And the second stage of unlocking will commence on March 29 by allowing six people or 2 households to meet in public, outdoor sports and sports events are permitted and people can travel outside the local area.

However, On the other side, the UK’s policy of focusing on older age groups means it will be some time before the vaccine rollout will have a significant impact on the virus’s spread. The step-by-step roadmap in England will not see all restrictions lifted until June at the earliest. Prof Whitty said government advisers needed three to four weeks after a restriction was lifted to assess the impact. And as the government wanted to give a week’s notice of any changes to the roadmap, a five-week gap was needed. He said, “If you look at the steps, each one is quite a big one,” also said, “You want to be confident it is safe.” He stated that the people who thought the UK was no longer at risk should look at continental Europe, with countries seeing rates going up and having to reintroduce restrictions.