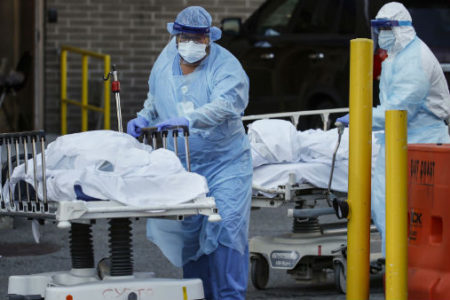 The COVID-19 death toll in the U.S surpasses half a million on Monday. When counted altogether, this figure is equal to the total number of Americans killed in World War II, along with other historical wars of Korea and Vietnam.

On Monday a ceremonial candle lighting was held at the White House by president Joe Biden. The president also ordered lower American flags at federal buildings for the next few days.

Biden said all the citizens that becoming numb to the sorrow and viewing each life as a statistic or blur should be resisted.

According to a closely watched model of the Washington University, there would 589,000 deaths occur in the country by June 1. This estimation is scarier since the country has been rolling out vaccine doses among Americans for around three months.

Johns Hopkins University recorded this number as the half-million milestone. The country reached this number as the states were doubling their vaccination efforts after the pause due to the winter storm attacks. The creeping deliveries also denied tens of thousands of people to receive their vaccine shots and adversely affected the U.S to reach this so fast.

The U.S currently remains at the topmost position in death tolls around the world. The global toll of COVID-related deaths is reported as 2.5 million in the present. Among these, 20% of deaths have occurred in the country.

The growth in the death toll in the U.S is spontaneous. The initial report on deaths related to COVID-19 was held in February 2020. It took only a year for the country to surpass half a million and presently it reached 512,590 deaths.

When the first case of death was reported in February, the numbers hiked to 100,000 by June 2020. Later, the toll reached 200,000 in September. The toll rapidly elevated within a matter of a few months and reached 300,000 in December. The troll was even enlarging spontaneously, and the next month it was reported as 400,000. Presently, when half of this month is passed, the toll raised even with another 100,000 and more.

According to the reports back then, the estimated deaths of Americans in World War II were 405,000. In the Vietnam and Korean wars, the trolls were 58,000 and 36,000 respectively.

The drop in the average death toll in the U.S was relieving over the past few weeks. The per-day average of total deaths in the U.S has fallen from more than 4,000 to 1,900 and lesser.

After the post-holiday surge in COVID-19 figures, people were strictly following the preventive measures, and this trend contributed to the country having a comparatively lesser daily average.

However, the presence of the more contagious variants in the country remains confusing, since experts are sharing their anxiety regarding the same.

Experts in the country are also anxious that the vaccination efforts didn’t cover the required number of people to reach herd immunity.