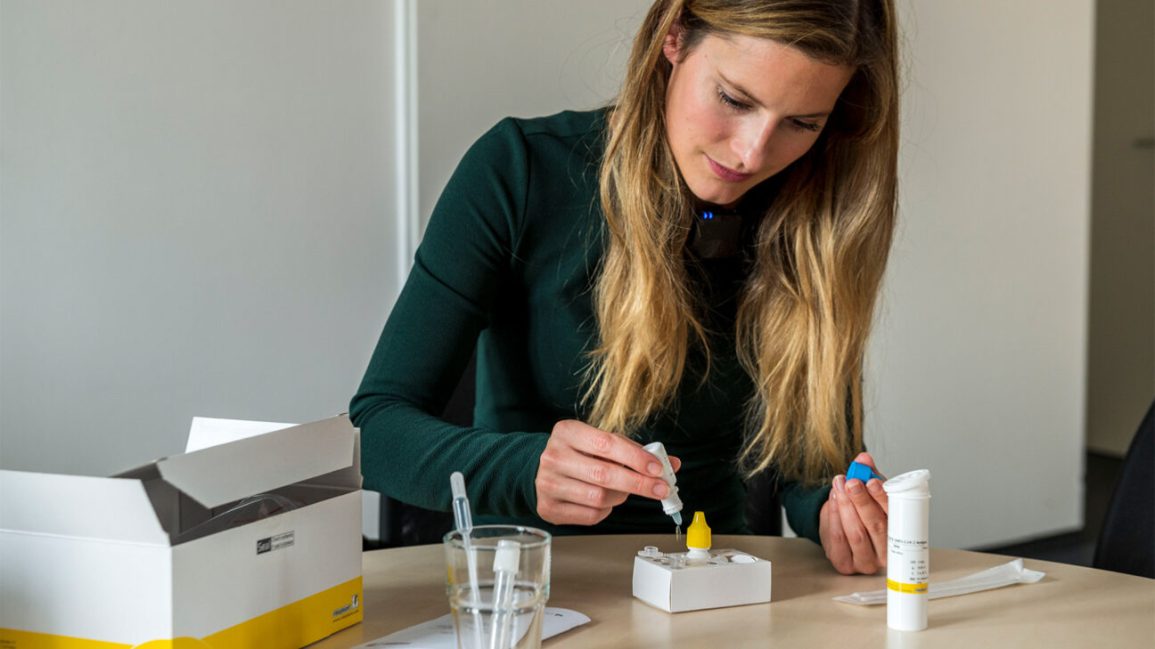 Rodney Coles Sr. conducts a Covid-19 test in the comfort of his own abode three days a week.

Coles, who is  the CEO of the North Carolina-based Churches Outreach Network, collects swab samples from his nose and stirs it into a small tube loaded with a reagent. His test result appears on a small paper strip after 10 minutes. The test is negative if it shows a blue line. A pink line, on the other hand, denotes a positive result. The whole testing process resembles the technique of a pregnancy test.

Is It Possible To Control The Spread Of Covid-19 With Routine At-Home Testing?

“Whether you are positive or hoping that you are negative, conducting this test at home, at your own comfort is easy,” he said. “However, if you happen to be tested positive, you should take precautions.”

He got one of 40,000 at-home testing kits distributed in Pitt County, North Carolina, where the CDC and the National Institutes of Health initiated the first public health programme in the US to see whether routine, at-home testing would avoid the transmission of the virus.

Dr. John Silvernail, Pitt County’s public health officer, said, “The aim of the research is to see if doing testing in the home will reduce transmission between family groups or cohabiting groups, and thereby reduce spread into the population at large.”

Participants in the trial, which is also being launched in Chattanooga, Tennessee, are asked to use the procedures as a diagnostic technique, checking themselves three days a week — frequently enough to detect an infection and isolate themselves before it spreads.

Silvernail explained, “It’s another weapon in our toolbox.” “It keeps these people in isolation for a longer period of time. It expedites the quarantine process.”

While participants are not expected to submit their findings, CDC and NIH experts will monitor the county’s case numbers, hospitalization rates, and also check for evidence of the virus in wastewater to see whether outbreaks are dropping — an indication that the initiative is successful.

This move comes as health authorities around the country struggle to get more people inoculated, and cases of the disease continue to increase in certain areas, especially among young people.

The 7-day average positivity rate of Pitt County has risen to 7.2 percent, which is twice than a few weeks earlier. Immunization rates have remained unchanged while the number of cases increases, with only 26% of the county’s 185,000 inhabitants having received vaccinations.

“We’ve seen some of the vaccination demand decline as we’ve expanded eligibility across the state.”, Silvernail said. “The forbidden fruit is the sweetest, as we all know. People wanted to get vaccinated when they were not eligible and now that they are, they prefer to wait.”

Pitt County is confronting other challenges too. Greenville, the county’s largest city, is primarily a college town and the student population appears to be fueling the current outbreak.

The majority of the county is largely rural outside of Greenville, leaving people with limited access to not only vaccines but also testing.

Access issues still affect the county’s vast populations of colour, which, like the rest of the nation, were disproportionately affected by the pandemic.

The aim is that these tests will not only tackle some of the county’s access problems but will also minimize the disparity between increasing cases and declining vaccine rates, preventing future outbreaks. If successful, the National Institute of Health officials believes the initiative could serve as a guide for minimizing transmission in other areas where cases are on the rise.